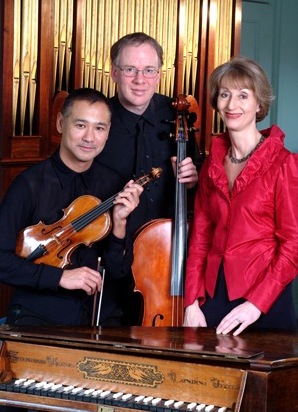 The London Fortepiano Trio is established as the leading ensemble specialising in the performance of classical piano trios on historical instruments. It made its mark with its first major series of concerts in London in 1982 to celebrate Haydn's 250th anniversary, and quickly followed this with the first recording of Mozart's piano trios on period instruments. Linda Nicholson is a founder member of the Trio, and was joined by Hiro Kurosaki in 1996 and Martin Fritz in 2005.

The repertoire of the Trio is founded on the greatest works written for the genre, namely the trios of Haydn, Mozart, Beethoven and Schubert. The Trio specialises in programmes that compare and contrast these familiar works with those by lesser known contemporaries such as Gyrowetz, Eichner, Storace etc.

The Trio's use of historical instruments has greatly influenced its style of playing and has proved to be a major factor in its success. It is not merely a question of dry pedagogy but a means of stimulating audiences by the recreation of the soundworld familiar to the classical composers. The lighter, brighter sound of the Trio's instruments, together with the dynamic yet expressive playing of all three members, make an immediate impact on the listener.

The Trio has appeared at major festivals and concert series throughout Europe and the Far East, most recently at the Salzburg Mozart-Woche, the Festival of Flanders in Bruges, the Beethoven Fest in Bonn, and the Styriarte festival. The Trio has made numerous radio and CD recordings featuring the works of Haydn, Mozart and Beethoven.