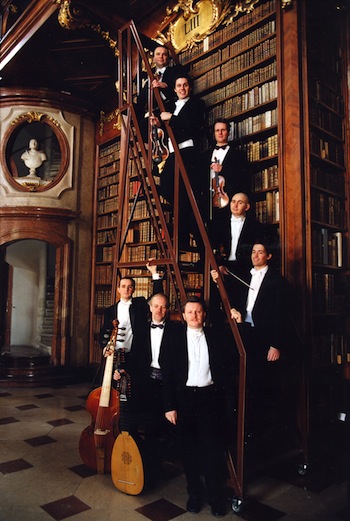 ARS ANTIQUA AUSTRIA was founded in Linz in 1989 by Gunar Letzbor, with the aim of introducing audiences to the roots of specifically Austrian baroque music played on period-instruments.
The music performed at the imperial court in Vienna during this period shows strong influences of Italian and later also French style, but also blended in Spanish court ceremony. But the typical Austrian sound of the period mainly reveals the influence of the many Crownlands: Elements of Slavic and Hungarian folk music mingle with alpine sounds and all this can easily be detected in the art music of the period, too. So the Austrian sound also reflects the temperament and character of the Austrians of that period - a unifying element in the melting-pot of so many different cultures: the joie de vivre of the South, Slavic melancholy, French formality, Spanish pomp and the Alpine character of the German-speaking regions. This fusion of courtly music with folk music and a strong portion of dance are the elements forming the typical Austrian sound.

The core of ARS ANTIQUA AUSTRIA comprises eight musicians directed by Gunar Letzbor. The number of players though is often augmented or reduced, according to the repertoire. For vocal repertoire the musicians around Gunar Letzbor preferredly work together with the St. Florianer Sängerknaben, one of Austria's leading boys choirs and an ensemble with a tradition of nearly a millenium.

During its early years ARS ANTIQUA AUSTRIA gave numerous concerts while researching the achievements of Austrian baroque composers in depth. Thanks to Gunar Letzbor's unflagging commitment, many works received their first performances in modern times.

Surely what characterises this ensemble is mainly his special focus on the repertoire from the Austrian Baroque. But this focus also led to a certain culture of sound: the unusual smooth and warm, but at the same time still perfectly articulated and flexible sound, which the musicians developed in working together for more than 25 years.
So in a time, when a lot of Baroque ensembles wallow in a very narrow, sometimes even sharp-edged sort of tone, ARS ANTIQUA AUSTRIA enthuses with an esthetic of sound, which leaves the listener feeling like in a homely heated Viennoise coffeehouse with a veritably pleasant and extensive offer of Bohemian tortes and specialities. Simply gorgeous!

But even the most beautiful sound wouldn't be appealing without the technical abilities of the musicians of ARS ANTIQUA AUSTRIA. They not only play perfectly in tune, stilistically well-considered, impressingly virtuosic, but also easily and reliably together - as well in the Austrian as in other repertoire.