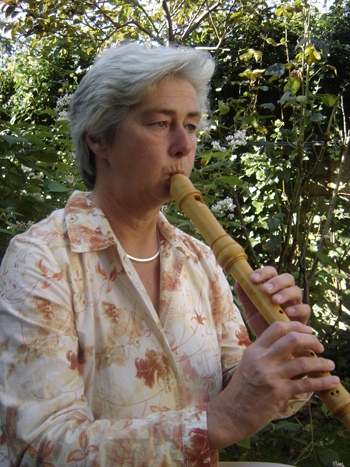 The Dutch recorder player Reine-Marie Verhagen studied the recorder with Walter van Hauwe at the then "Amsterdamsch Conservatorium". She also studied with Walter van Hauwe. She finished her studies in 1976 and almost immediately began her teaching career at a diverse number of music colleges (including Enschede and Utrecht). Since 1988 she has been principal recorder teacher and teacher of verbon Aden technique at the royal conservatoire in The Hague.

Since 1983, Reine-Marie Verhagen has been a a regular member of the Amsterdam Baroque Orchestra, conducted by Ton Koopman. She has taken part in many recordings and concerts with this ensemble (J.S. Bach’s cantatas, Brandenburg Concertos, as well as works by George Frideric Handel, Purcell and Charpentier). With the ensemble La Sfera Armoniosa conducted by Mike Fentross she performed several 17th century operas. She is also active abroad (Europe, Japan and the USA) both as a teacher and performer (with the harpsichordist Tini Mathot she forms the basis of the Corelli-ensemble), has been jury member during the open Dutch recorder days in Utrecht (SONBU) and for the "Stichting Jong Muziektalent Nederland" (Dutch foundation for young musical talent). For the past 10 years she has also regularly performed 17th-18th and 20th-century music in San Francisco, Amherst, Boston, and New York.

Reine-Marie Verhagen takes keen interest in the contemporary repertoire, from Japanese composers to Steve Reich. For the Steve Reich festival at the Royal Conservatory at The Hague in December 2003, she made a very successful transcription of his Vermont Counterpoint for solo recorder and an 11-member recorder ensemble. This composition was also performed in October 2007 at the International Minimal Music Festival in Kassel, Germany, in combination with the Premiere of a new minimal composition, written for Reine-Marie Verhagen, by Ulli Goette: Mural.

Not confining herself exclusively to musical performance, Reine-Marie Verhagen was a co-founder and former member of the board of the Dutch branch of the ERTA