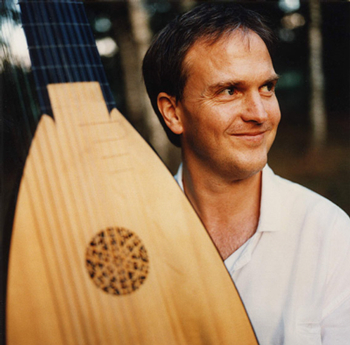 Jakob Lindberg was born in Djursholm in Sweden and developed his first passionate interest in music through the Beatles. He started to play the guitar and soon became interested in the classical repertoire. From the age of fourteen he studied with Jörgen Rörby who also gave him his first tuition on the lute. After reading music at Stockholm University he went to London to study at the Royal College of Music. Here he further developed his knowledge of the lute repertoire under the guidance of Diana Poulton and decided towards the end of his studies to concentrate on renaissance and baroque music.

Jakob Lindberg is now one of the most prolific performers in this field. He has made numerousrecordings for BIS, many of which are pioneering in that they present a wide range of music on CD for the first time. He has brought Scottish lute music to public attention, he has demonstrated the beauty of the Italian repertoire for chitarrone and he has recorded chamber music by Vivaldi, Haydn and Boccherini on period instruments. He is the first lutenist to have recorded the complete solo lute music by John Dowland and his recording of Bach's music for solo lute is considered to be one of the most important readings of these works.

Jakob Lindberg is an active continuo player on the theorbo and arch lute and has worked with many well known English ensembles including The English Concert, Taverner Choir, The Purcell Quartet, Monteverdi Choir, Chiaroscuro, The Orchestra of the Age of Enlightenment and The Academy of Ancient Music. He is also in demand as an accompanist and has given recitals with Emma Kirkby, Ann Sofie von Otter, Nigel Rogers and Ian Partridge. He assisted Andrew Parrott in the musical direction of Purcell’s Dido and Aeneas given by The Royal Swedish Opera at Drottningholm Court Theatre in 1995. He also directed from the chitarrone the much acclaimed performances of Jacopo Peri’s Euridice given there in 1997.

It is particularly through his live solo performances that he has become known as one of the finest lutenists in the world today; he has given recitals in many parts of Europe, Japan, Mexico, Russia, Australia, Canada and the USA. Jakob Lindberg also teaches at the Royal College of Music in London, where he succeeded Diana Poulton as professor of lute in 1979.