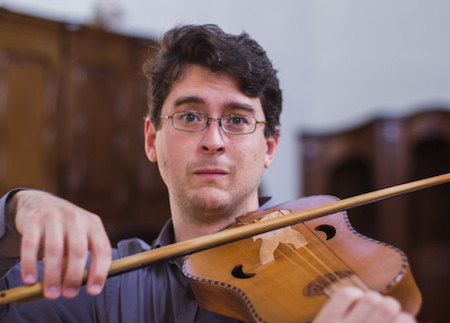 After studies in violin and composition at the Conservatoire National de Région in Rueil-Malmaison, Baptiste Romain went on to specialize in Medieval and Renaissance music, studying Medieval fiddle, ancient bagpipes, and voice. After working with Marco Horvat at the Centre de Musique Médiévale in Paris, he moved to Switzerland where he studied with Randall Cook, Dominique Vellard and Crawford Young at the Schola Cantorum Basiliensis, as well as pursuing chamber music studies with Pierre Hamon at the Conservatoire National Supérieur in Lyon.

During his period at the Schola Cantorum, he also explored the techniques and repertoires of the renaissance violin, and completed his Soloist Diploma in March 2008.
In 2017 he was appointed professor for bowed instruments of the Middleages and early modern era at the Schola Cantorum Basiliensis. Furthermore he teaches medieval music at the University of Besançon and has given numerous masterclasses all over the world.

Influenced by jazz and traditional music, he constantly searches for new ideas pertaining to the historically informed performance of early music, and is passionate about improvisation, vocal accompaniment and the instrumental repertory.