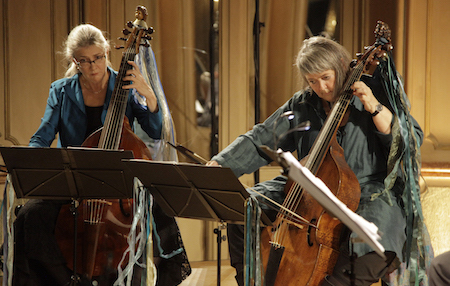 Les Voix humaines Les Voix humaines, the viol duo, has thrilled audiences worldwide with dashing performances of early and contemporary music for three decades. Susie Napper and Margaret Little‘s musical complicity has been compared to the skill of two trapeze artists or the telepathic communion of a pair of jazz saxophonists!

In the beginning, our tiny kids played with their dolls while we played our viols, experimenting with fascinating new repertoire, tinkering with Ste Colombe and Couperin. As our kids grew, so did our repertoire and our unique style of playing. Still arguing, persuading, negotiating like kids, we continue to develop, finding or creating new repertoire and performing with as much intensity as ever!

They are renowned for their spectacular arrangements of a wide variety of music for two viols, following in the baroque tradition of “covering” music originally composed for other instruments and adapting it for viols.

Knowing that recycling music was a normal practice in the baroque era, we arranged a pile of our favourite baroque repertoire for ourselves. If Bach could arrange Vivaldi, we could arrange Dowland, Rameau, Couperin, Marais, Bach etc!

The duo is often joined by colleagues (Bart and Wieland Kuijken, Charles Daniels, Eric Milnes, Skip Sempe, David Greenberg and Nigel North), who share the joy of experimentation and the discovery of new and unusual repertoire for two viols with other instruments or voice.

Over the past three decades the duo has toured the world (North America, Europe, the Baltic, Far East, Australia and New Zealand), and made over forty recordings on the ATMA Classique label (Diapason d’Or, Choc du Monde de la Musique, Repertoire-Classica 10, Goldberg 5, Classics Today 10/10). Their marathon recording of the complete Concerts a deux violes ésgales by Sieur de Ste Colombes is a world première. 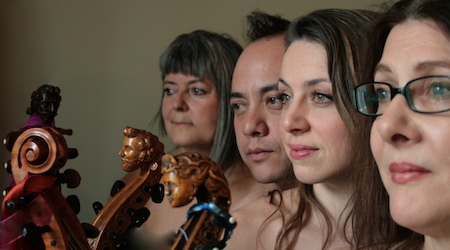 A decade ago the duo was joined by Mélisande Corriveau and Felix Deak to form Les Voix humaines Consort of Viols to take a refreshing look at the huge repertoire for multiple viols.

Our unique, controversial ideas offer a new profile to consort playing in which rhythmic freedom and ornamentation play an integral role. Our 2017 recording of Dowland’s Lachrimae is an example of our novel way of approaching a piece considered untouchable canon amongst viol players!

As well as the grand English consort repertoire, Bach’s Art of Fugue and the Purcell Fantasias, the Consort performs lesser known discoveries by Trabaci, Lupo, Moulinier and Charpentier to which we bring years of experience and experimentation as viol, recorder, fiddle and bass violinists!

As the biographer and music historian Roger North put it in the 17th century: «With (viols) set to play the same lesson, if perfectly in tune with one another, it is better music when one goes a little before or behind the other than when they play (as they zealously affect) to touch together. For in that nothing is gott by the doubling, but a litle loudness; but in the other way, there is a certain je ne scais quoi with frequent dissonances and a pleasant seasoning obtained».

The consort has toured in Canada, Mexico, Europe, Scandinavia and the Baltic States and recorded Bach’s Art of Fugue, Purcell’s Fantasias, Dowland’s Lachrimae as well as their own, unusual arrangement or Vivaldi’s Quattro Stagioni for equal viols: 4 Seasons - 4 viols.

They are creative and fanciful in their choice of repertoire, curious and open minded in their programming, stylistically at ease and technically masterful in their playing, true and authentic in their interpretations - a recipe that is truly crowd pleasing! In short, Les Voix humaines brings fresh air and a new public to the viol world and to it’s concerts!
Always technically and musically outstanding, the musician’s novel programmes, arrangements and adaptions bring fantastic and unusual music to audiences.

The musicians’ curiosity and openness to new ideas is expressed in their tremendous versatility: over more than three decades Les voix humaines has developed an enormous repertoire for a variety of formations from two viols up to mixed, larger ensembles with vocal soloists. From classic English consort music of the 16th and 17th centuries including Purcell’s Fantasias, to French, Italian and German Baroque works including Bach's Kunst der Fuge or Vivaldi's Quattro stagioni - the duo and consort perform a wide variety of music and are fascinates by unexpected styles with the qualities that make for appealing arrangements for viols.

The concerts of this Canadian gamba band are not only amusing, lively, thrilling, technically skillful, musically intense, and lush with a panoply of sounds, but are imbued with the infectious joy that their work obviously gives them and which they communicate directly to their audiences!