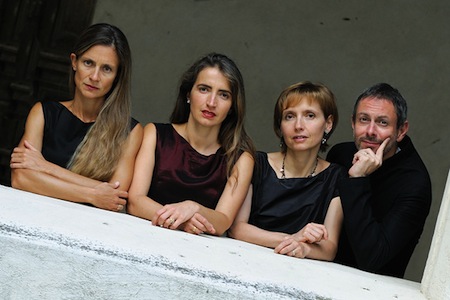 In 1986 two pairs of young sisters from Italy founded the Medieval ensemble laReverdie: the name, derived from a poetic genre that celebrates the return of Spring, reveals perhaps the principal trait of a group that for over twenty years now has captivated audiences and critics alike for the variety in its approach to the vast and varied musical repertoire of the Middle Ages and first Renaissance. Since 1993 the cornetto player Doron David Sherwin joins the group, both as player and singer. Presently the ensemble performs in groups from three to fourteenth musicians depending on the reperotire.
The deep research together with the experience reached during the long and intense activity, have made laReverdie an unique ensemble, both for the extraordinary enthusiasm they share and communicate to their audiences, as well as for their assured and natural virtuosity in playing and singing.

The group has regularly performed in festivals and on concert stages all over Europe. Furthermore in october 2011 laReverdie has been involved in a tournée in Mexico.
Also the ensemble has recorded and broadcasted in Italy, Germany, Belgium, France, Austria, Portugal, Spain, Poland, Slovenia, Switzerland and the Netherlands.

Thus they have brought out eighteen Cds, thirteen for the French company Arcana and co-produced by the German broadcast company Wdr, which have received various awards from the European press, such as the Diapason d’Or de l’Année (the first awarded to an Italian ensemble in the category of Early Music), 10 de Répertoire, 10 from Crescendo, ffff from Télérama, “5 stars’ from Musica and A from Amadeus. The last CD "Carmina Burana - Sacri Sarcasmi" (Arcana A353) is one of the three Finalist 2010 Midem Classical Awards in the category Early Music.
In 2000 the Festival International de Santander chose a live recording of a concert given by the group that year to be issued as a Cd with the title La Reverdie en Concierto.

Since 1997 the group’s members have been involved in teaching at summer courses such as the International Early Music Course in Urbino, Italy, as well as masterclasses and regular instruction at institutes such as the Accademia Internazionale della Musica di Milano and the Laboratorio Internazionale di Musica Medioevale di Alia Musica in Italy as well as the Staatliche Hochschule für Music Trossingen in Germany.