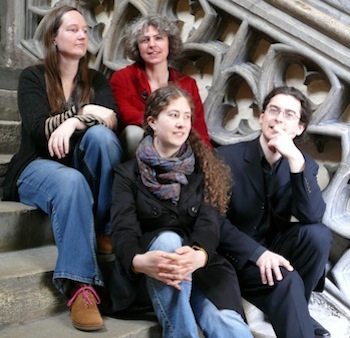 The ensemble PER-SONAT was founded in 2008 by singer Sabine Lutzenberger and traverso player Norbert Rodenkirchen, in order to perform music from the Middle Ages up to the Renaissance. In this repertoire, PER-SONAT quickly established itself as one of the leading groups in Europe and beyond.

The cast of the ensemble ranges from two to eight musicians, depending on the repertoire, and all their concerts and recordings place particular emphasis on interpretations based on thorough knowledge of the original sources, explaining the medieval lyric in a thrilling and vivid way, and creatively involving authentic playing techniques, improvisation and instrumental accompaniment.

With this in mind, Sabine Lutzenberger and her colleagues want not only to (re-)explore this splendid music which was often forgotten for centuries, but also to convey to their audiences the mentality and intellectual ideas of the Middle Ages and Renaissance in the context of this music, which is so closely connected to religion, philosophy and poetry.

PER-SONAT was and is invited for concerts in the most important Early Music Festivals all over Europe, such as Festival Oude Muziek Utrecht, Tage Alter Musik Regensburg, montalbâne, Festival Musique Médiévale Abbaye du Thoronet, Laus Polyphoniae Antwerp, Voix et Route Romane, Netwerk Concerten Utrecht, Via Medieval, and many others.

The ensemble has released three CDs so far: Heinrich von Meissen, the Roman de la Rose and Hildegard von Bingen, and all were warmly welcomed by audiences and critics.
Several broadcast recordings complement the work of PER-SONAT.