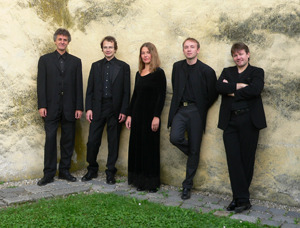 The ensemble Ordo Virtutum for medieval music founded in 1989 by the musicologist Prof. Dr. Stefan Johannes Morent is devoted entirely to the reconstruction and interpretation of the vocal and instrumental music of the Middle Ages.

It combines the passion for performance with the most recent musicological studies in an attempt to reconstruct the musical world of medieval Europe.

The ensemble worked and performed in close collaboration with renowned experts of medieval performance practice such as Andrea von Ramm, Sterling Jones, Benjamin Bagby, Anne Azema, and others

The ensemble presented its results in the last years at concerts and festivals all over Europe, the USA and Australia, especially its work in the field of medieval drama, the last productions being fully-staged versions of the "Play of the wise and foolish virgins", the famous "Carmina Burana"and the "Ordo Virtutum" by Hildegard von Bingen

The ensemble is praised for its "artistry in vocal and instrumental music".