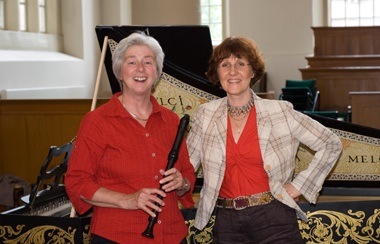 In 1980 Reine-Marie Verhagen and Tini Mathot founded the Corelli-Ensemble, in order to perform the splendid chamber music repertoire for the recorder. Musicians who collaborated with the Corelli-ensemble include Max van Egmond, Barbara Schick, Ton Koopman, Marion Verbruggen and Wilbert Hazelzet.

Reine-Marie Verhagen studied the recorder with Pieter van Veen and Walter van Hauwe and graduated in 1976. She soon started her teaching career. She taught at the conservatories in Enschede and Utrecht, and since 1998 she has taught both methodology and the recorder as a principal subject at the Royal Conservatory at The Hague. She gives interpretation classes for baroque and avantgarde recorder music. She also gives masterclasses for amateurs and professionals in Europe and USA.

Reine-Marie Verhagen is a regular member of the Amsterdam Baroque Orchestra, conducted by Ton Koopman. She has participated in many ABO concerts and recordings, performing a wide variety of baroque music: Bach´s cantatas and Brandenburg concertos as well as works by Händel, Purcell, Charpentier and Bach arrangements with Yo Yo Ma. With the ensemble La Sfera Armoniosa conducted by Mike Fentross she performed several 17th century operas.

Reine-Marie Verhagen often performs in The Netherlands, for instance at the famous Early Music Festival in Utrecht. For the past 10 years she has also regularly performed 17th-18th and 20th-century music in San Francisco, Amherst, Boston and New York.


Tini Mathot was born in Amsterdam. She first studied piano, then harpsichord, at the Sweelinck Conservatory of Music in her home town.
She works closely together with her husband and former teacher Ton Koopman, a duo which performs nunmerous well- and less-known works for harpsichord, fortepiano and organ. Tini Mathot and Ton Koopman have guested with chamber music and concertos in the most famous concert houses in Europe, the USA and Japan, including the Vienna Musikverein, the Metropolitan Museum in New York, the Chatelet Theater in Paris and concert halls in Geneva, Milan, Lausanne, Echternach, Ansbach, Atlanta, Carmel, Saratoga, Southampton, Bristol and Tokyo.

Tini Mathot is recording producer for Ton Koopman, the Amsterdam Baroque Orchestra & Choir, also for other outstanding ensembles. In this function she has produced numerous CDs for Erato, Teldec, Sony, Philips, Antoine Marchand/Challenge an other well-known labels.

Tini Mathot is mainly active as a performing musician in the field of chamber music. She is a member of the Corelli Ensemble, alng with Reine Marie Verghagen. She was awarded the Diapason d´Or in France for the interpretation of the Haydn Trios on CD, released by Erato (with Andrew Manze, violin, and Jaap ter Linden, violoncello).

She accompanies singers such as Lisa Larsson and Klaus Mertens on the fortepiano. In 2005 a CD was released with Schubert´s Winterreise performed by Klaus Mertens and Tini Mathot. On it she plays an original fortepiano by Rosenberger.

Besides the activities mentioned above, Tini Mathot is at the present teacher of harpsichord at the Royal Conservatory of Music in The Hague.